Excerpt: A Wing In the Door 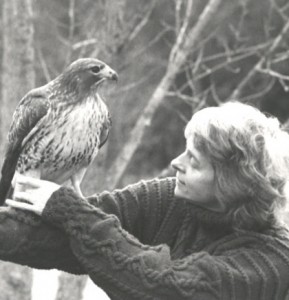 One day, after returning from an afternoon drive, I go behind the house to gather in the washing I had hung to dry. After a week of hard, near-frost days, this is a day of dreamy hazy blue and is warm enough for shirtsleeves. I automatically glance north of the barn, as I so often do now, searching to see whether Merak is with us. There, much higher than I’ve seen our bird fly, I detect a gracefully circling red-tail. Could it be? Surely not. I don’t dare say her name aloud, lest I distract her, even if she likely is too high to hear me. I watch the lovely, perhaps not quite perfect flight, hoping it is she, and half-fearing it might be, because that would mean that she is beginning to distance herself from us. And then, from the midst of that long time and that great sky, she sees me. I hear her sweet talk, as remote as that of high-flying migrating geese at night, and she begins to drift, in amazed circles, toward me. Clearly she is undecided, want to come down to talk to me, but doesn’t want to lose her new bliss. Apparently unsure about landing, she considers first the barn and then a telephone pole, but the wind is too abrupt. After a brief uncertainty she cruises successfully in to the broader target of the cottonwoods, from which she and I exchange stares of wonder.

In these moments of watching, I have come closer to experiencing flight than I ever would have believed possible. In my profound empathy, I actually have been riding in the heart of Merak. But because of her newfound ability, I now begin to wonder more seriously whether she might migrate after all. Joyous as I am in her new acquired skill, my sadness at the possibility of her leaving is acute. Meanwhile, modest, pleased, the bird sits on in the cottonwoods, preening her splendid new red tail, examining and caring for her miraculous feathers with a new regard.

For more about this remarkable bird:  A Wing In the Door