Many years ago, we bought a tiny, plucky black kitten, christened with the original name of “Kit” by our younger son, Jeremy. It quickly became clear to us that wicked and busy Kit kitten needed a companion to play with. So one September Saturday, my older son, Morgan, my partner in crime on such expeditions, drove with me on an exciting trip to Arnprior to choose a bluepoint female kitten.

However, we were disappointed when we first introduced the two kittens. As soon as Kit flung his black arms around his new “sister” and began fervently heel-kicking her, well-bred Mia gracefully but firmly disengaged herself. The sweet cream and grey siamese was as dignified as Kit was rowdy. Somehow, though, the two quickly bonded in spite of their differences and became inseparable. Patient Mia learned to sufferer Kit’s explosive, playful advances, which often ended with the pair exhausted, sleeping curled in an endearing light and dark ball of fur. 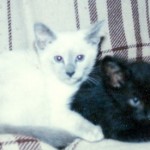 The two kittens were fervently affectionate to everyone. It wasn’t unusual to find me in the kitchen trying to cook with a kitten clinging to each shoulder of my sweater. They often slept on Morgan’s pillow with him, shadowed Jeremy, and welcomed all comers with high enthusiasm.

The following spring, we introduced the kittens to the outdoors*, watching enchanted as Mia leapt in the air, apparently trying to fly like a butterfly. Overwhelmed by the wideness of their new world, the wide-eyed pair, drove their elderly “Uncle” Valentine, a crusty bachelor
chocolate Siamese to distraction. They followed him on his cricket-hunting forays, Mia singing her excitement all the way. We laughed uncontrollably at Valentine’s frustration. The old cat felt responsible for the impossibly keen pair, yet their ridiculous antics put an end to any hopes of successful stalking.

In early autumn a tragedy occurred that scarred us for years afterward. Mia, always so good about returning home in time for supper, failed to appear. Distraught, we searched everywhere, calling her, begging her, horrified by the risks to a gentle, unsuspecting, light-colored cat. For weeks, we searched, keeping our hope that she would come back to us alive. Every day, the boys looked for her on their walk home along the park road. On his rounds, and even when he was teaching visiting school groups, Barry was always listening for her. Then, one dreadful afternoon after the leaves had fallen and the forest was blanketed with fallen pine needles, I found a little pile of bones in a hollow. That must have been it. A fox had taken our sweet, loving companion, Kit’s friend.Without his playmate, we were saddened to see Kit mature into a sober adult. It felt even harder to have a pet disappear, to not know the ending of her story, than it had to see one die.

A decade later, we ran into a former guide leader in a local bookstore. “We used to love to come to Foley Mountain,” she told us. “The girls always got so much out of those camping trips. Why, one time, we even rescued a lost cat and took her home with us on the bus.” We gulped. “What color was it?” Barry blurted. She thought a moment, remembering, “Sort of a light grey. It looked like a siamese,” she said. “It was kind of funny really. What happened was that this cat kept going in the girls’ tents. Siameses have a reputation for being stand-offish, but not this one. She was so friendly that we thought someone must have dropped her off in the park, so we took her home with us. So far as I know, she had a very happy home with one of the girls.”

There was nothing we could say, either to the guide leader, or ourselves. Mia had lived, had gone on to a good life with another family. But oh, the difference that made for us. Since the advent of fishers in our area, we have kept the next generation of kittens indoors. This
is still a difficult decision to live with. Undeniably, cats are ruthless avian predators. Still, watching the wistfulness of a cat staring through a screen at the outdoors, I feel I have denied ours a precious part of its rightful existence.

Peri Phillips McQuay is the author of Singing Meadow: The Adventure of Creating a Country Home, The View From Foley Mountain, a book of nature meditations on her experiences living for 30 years at the Foley Mountain Conservation Area and A Wing in the Door: Life With a Red-tailed Hawk is the story of her adventures with Merak, a human-imprinted hawk, who lived free but saw McQuay and her family as her special people. Also Peri has written numerous essays, articles, book reviews and a weekly column, published in the Kingston Whig-Standard Magazine. Her credits include Country Journal, Harrowsmith, Bird Watcher’s Digest, The Snowy Egret, Seasons, The Fiddlehead, Herizons and Brick.
View all posts by Peri McQuay →
This entry was posted in Country Living, Foley Mountain C.A. and tagged country life, Country Living, Foley Mountain, Foley Mountain Conservation Area, siamese cats, Simple Living. Bookmark the permalink.