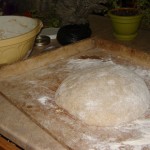 It started with a book and a bowl.

When I discovered Edna Staebler’s inviting recipe for Neil’s Harbour White Bread in her essential cookbook, Food that Schmecks, I knew I
wanted to explore breadmaking for myself . “We were very poor in material things that year, so it seemed to make sense to make the loaves we ate. When I found the handsome large Gripstand yellow china bowl marked down in a closing sale for Lemke’s wonderful hardware store in Pembroke, everything began to fall into place.

Or maybe this adventure began long before that. “You’ll want this.” Hearing of my plans, my father handed me a plain large board surrounded on three edges with low sides. “My father made this breadboard as a gift to my mother on their marriage.” When he handed it to me, he couldn’t help reminding me that, as far as he was concerned, bread was the “staff of life”.

Before long, I set out on the adventure for the first time myself. I stirred the live yeast into a cup of warm water, sweetened with a little of the honey from neighbors’ bees, and watched the miracle as it foamed up. Using my new yellow bowl I added the oh so simple ingredients, silky flour, a little butter, a dollop more honey, warm water and salt to the risen yeast and stirred the mixture with a hand-shaped wooden spoon. For all the simplicity, this was an art, and one I would need to practice. How could I know whether I had added enough or too little flour? The right amount apparently varied with the humidity in the air.

And kneading? “Kneading is a kind of revelling,” Staebler wrote. I scraped the unwieldy mass onto the floured bread board, and began, following directions to fold and turn, fold and turn, in a clumsy way. How could I tell when I had done enough? “People who bake bread develop a carefree, happy confidence,” Staebler was cheering me on.

Covering the bowl with one of my blue-checked handwoven towels, I set my bread to rise in the sunshine on the long pine kitchen table which has been with us since before our marriage.

Just as Edna Staebler promised, the bread dough mushroomed slowly over the next hour or so, reminding me that I was working with a living thing. I kept leaving my chores to check on it, amazed by the growth, until I guessed that it had doubled. Then I punched it down, or rather pushed it, with great satisfaction, to release the air from my creation. I never did much care for punching.

Somewhere along the way, whether it was when I cut the dough, rolled it into loaves and set them to rise in pans I had bought at a farm auction, placed them in the oven to brown, or when I tipped out the fragrant hot loaves out on racks to cool, I became addicted to the touch, the rhythms, the scents of bread-making. For years, when I had sons and a husband needing lunches, I made six loaves at a time.

There is always something new to learn. I have explored sweet breads, sourdoughs and French breads, always using my hands, not a machine, to mix and shape them. Thinking about it on this early spring morning, it occurs to me that it could almost be a history of a life, written in breads. Breads taken to congratulate or comfort. But best of all, everyday breads, always the same and always different.

If you don’t already know about this pleasure, you might want to try for yourself. And you couldn’t find a better teacher than Edna Staebler.

Peri Phillips McQuay is the author of Singing Meadow: The Adventure of Creating a Country Home, The View From Foley Mountain, a book of nature meditations on her experiences living for 30 years at the Foley Mountain Conservation Area and A Wing in the Door: Life With a Red-tailed Hawk is the story of her adventures with Merak, a human-imprinted hawk, who lived free but saw McQuay and her family as her special people. Also Peri has written numerous essays, articles, book reviews and a weekly column, published in the Kingston Whig-Standard Magazine. Her credits include Country Journal, Harrowsmith, Bird Watcher’s Digest, The Snowy Egret, Seasons, The Fiddlehead, Herizons and Brick.
View all posts by Peri McQuay →
This entry was posted in Country Living, Making, Simple Living and tagged Bobs Lake, country life, Country Living, Simple Living. Bookmark the permalink.