Shaw Woods, a majestic old growth forest near Cobden would be a magical place to visit on any day, but to walk its trails in autumn is unforgettable. Growing up, as I did in a small beloved woods, has meant that trees feel like family to me. Caring about them is a ground for everything else in my life. So spending a day exploring a small part of what this special place has to offer was a moving experience for me.

Barry and I came to the Foley Mountain Conservation Area overlooking Westport, the place where we lived and worked for thirty years, partly because of the great white pine forest there. Actually, as I wrote in my first book, The View From Foley Mountain, it was my search for mature trees which lead us to our special life at the conservation area.

Like Foley Mountain, Shaw Woods has an active education program, and also offers well-marked self-guided trails for casual visitors. On the day we hiked there, we enjoyed seeingan exuberant group of children who were dancing around the picnic shelter before they set out on a learning adventure.

However, Barry and I simply wanted to spend a day experiencing the area’s remarkable trees on our own, so we set out with Magnus, our small dog, on the Connaught Trail. It would have been moving enough to pass beneath the grove of immense curly-barked yellow birches, one of my favorite species, ever since I first encountered some at Foley Mountain. Each of the old birches was a character to be enjoyed as an individual. After that we turned the loop, ascending a slight hill, and came upon what has been called a cathedral of hemlocks. I am fortunate to be used to the large girths of trees where I live. But in the Shaw Woods, one of the things that made the two and three hundred year old specimens exceptional was that I had to look up and up and up before you could see their tops. Passing beyond this dark part of the forest, the light changed, flooding down through a beech woods. Here it was the gnarled roots, reaching across the forest floor which struck me most.

It was hard to leave the gathering of Ent-like trees, but we had more adventures ahead. After a quick sandwich near the trailhead we crossed the highway for a very different kind of walk. Crossing a dam over a one-time mill pond, we followed the serene shore of the pond under immense white pines which were pungent under the hot, autumn sun. Flickering above the pond were late meadow hawk dragonflies. Drifting through the weedy shallows were fingerling fish.

What this place calls out for is time to sit still and appreciate, and for a while we did just that on a welcoming bench before the trail turned away from the shore. Because of our stillness, a group of red-breasted nuthatches darted about our heads, calling to each other.

Tempting as it was to follow on, we decided instead to retrace the pondside path, and then go in the other direction, following the racing former millstream, black and foaming through dense woods. It would be hard to say which direction was more classically representative of north-country landscape. The Group of Seven feeling was everywhere, as was that of Emily Carr’s light in the forest. 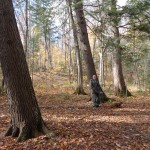 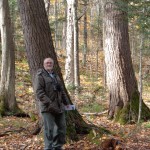 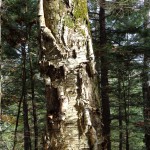 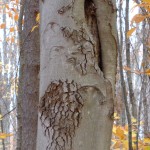 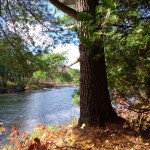 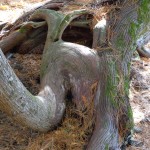 Twisted Roots by the Waterside 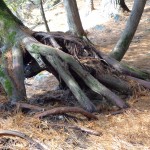 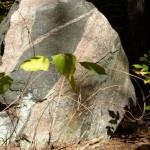 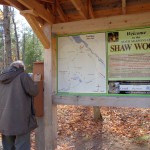 Peri Phillips McQuay is the author of Singing Meadow: The Adventure of Creating a Country Home, The View From Foley Mountain, a book of nature meditations on her experiences living for 30 years at the Foley Mountain Conservation Area and A Wing in the Door: Life With a Red-tailed Hawk is the story of her adventures with Merak, a human-imprinted hawk, who lived free but saw McQuay and her family as her special people. Also Peri has written numerous essays, articles, book reviews and a weekly column, published in the Kingston Whig-Standard Magazine. Her credits include Country Journal, Harrowsmith, Bird Watcher’s Digest, The Snowy Egret, Seasons, The Fiddlehead, Herizons and Brick.
View all posts by Peri McQuay →
This entry was posted in Country Living, Fall, Foley Mountain C.A., Nature, Trees and tagged children and nature, Foley Mountain, Foley Mountain Conservation Area, Nature, trees. Bookmark the permalink.