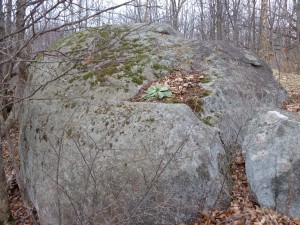 On a bitter, wintry day I walked up onto the Tableland to have a look at the beginnings of things. Any day now, the snow would come. Already there was a dusting in crevices and on a few dark green nests of moss. At this time of year my need to get out becomes fierce. I get an urge to visit as many of my favourite places as possible. Hurry. Soon they may be denied to you by ice and snow.

So, on a raw, cloudy day at the very end of November I decided to head for the Tableland while I still could, before the heavy snows come. Although I often dream of visiting this harsh but magical landscape at the top of the big ridge which guards our valley, many things deter me. But today there was no blazing sun, and there were no deerflies, no hunters, nor threats of phantom bears to keep me away. Facing into a small, raw northeast wind, easily ascending by the newest of our neighbour Blake’s excellent trails, the steep climb to the ridgetop lifted my heart.

With its open habitats of either a thin covering of soil or no soil, some might call the Tableland a “starve acres”. It is true that up there only the poorest trees survive, mainly greatly deformed red oaks and ironwoods. These are trees twisted and sick, surrounded by jumbles of fallen branches from hard times, branches which are going to make more soil some day. In the stony November afternoon light, this poverty was particularly evident. 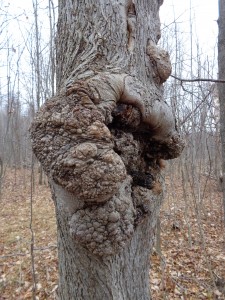 Given the extreme fluctuations in temperature up on the Tableland, with scarcely any insulation from trees, and with pitifully little soil to gather moisture, or to drain off excessive water, you might say that the rocky outcrops of this area were inhospitable. But I see this place as a crucible, the difficult melting pot where new life originates. At the moment patchy lichen and moss and fungus communities, the precursors of true plants, dominate the exposed rock, although in places there are grasses and other tough plants, such as early saxifrage (“stonebreaker”), which takes root in cracks in the original granite. To me each piece of fragile life here is precious, worth seeing. So I strode along joyfully, greeting many familiar small landmarks.

As I clambered over the starry moss and lichened rock-face I could feel the morning’s desk-work tension falling from me. How healing it was to be able to walk, to see. Often, too, I turned to take a breathtaking look over my shoulder, back through the ridge’s bare-branched trees, looking into a vastness which stretched beyond Bobs Lake and even beyond the far away pine forests. On and on.

Today, however, when I reached the part of the trail where I had been stopped, I could follow on until I came to a very different, more pastoral landscape. Here I crossed among rolling hills and strode down into groves, where sheltered, silver-trunked beech trees still held their autumn-golden leaves. Past tinkling streams I went, discovering several fine, large deep ponds I had never seen before. All of these were still without any ice at all. With amusement I realized that I could guess the depth of a pond by how much ice covered its surface. Because the beaver at our own heron pond below have devoured every possible food tree they have moved on. This means that with no beaver to mend the dam, the water there has drained to puddle depth. When I passed this one earlier, I noticed that it was entirely covered by an icey skin. 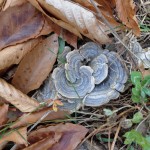 Each curve, each hill was leading me on and on. When at last I came in sight of Blake’s barn I turned back, but then I was tempted onto an offshoot trail through an alder swamp, across a rustling, grassy marsh, and up a fine, swooping hill. At last I was roaming as freely as I’ve longed to, with no creature sound except one scolding red squirrel, king of a castle of rocks. By now I had become so excited by my small adventure that I half ran up this hill. But what if I had guessed wrong? What if this second trail did not lead to the main trail which bisects the Tableland? In the back of my mind was the question that I was not sure how long I would be able to ignore the bone on bone grinding of my old back. If I had to retrace my steps, would it not be better to do so sooner rather than later? Wouldn’t it be wiser to simply turn back now? But onward I rushed. I simply couldn’t help myself. And at the hill’s crest, sure enough, there was the old wagonway which wound past familiar splendid large oaks prospering in a rare large pocket of soil. Assured of an easy return now, I swung along, pleased to see again a further heron pond, still harbouring a dozen stick nests in spite of recent fierce winds, and look, there it was.

When I left, I carried with me a promise. Next summer, I will come to watch the heron colony. But, also, it seemed to me that this distant, mainly forsaken ridge would be a likely place to closely observe the ravens, turkey vultures and hawks who sail above our valley, and so I plan to venture back up there to find them as well. With that, in the darkening light of a short afternoon, I loped off the cartway onto the trail back down from the high hills, past our planted pines, some now taller than I. And on to the lights of home, welcoming me back into the world.