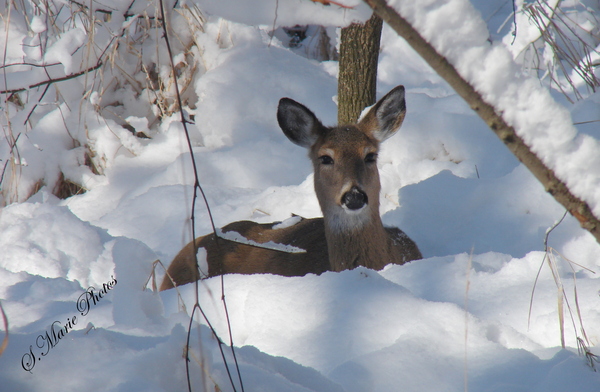 Two years ago, we saw three does and their four yearling fawns roamed the neighborhood as they always did, following their habitual trails up from the valley, boldly gleaning twigs, rose canes and compost.

Then, just before Easter, we witnessed something rare and inexplicable. It started with three does hurrying down the road in front of our house on a grey, cool Sunday morning. “Come and see,” I told Barry. “They look so purposeful,”

“There are more,” he gestured. “You’d almost think they were excited, the way they’re moving. And why are they walking down the road like that, instead of cutting through our land the way they usually do?” We both stood at the front window, watching as more and more deer rushed to join the strange procession. The yearlings followed, bucking and pushing until the older deer butted them into obedience. It was as if this strange gathering was important and serious, yet almost joyful, too. As we counted, an astonishing seventeen deer streamed past our house, three times more than we’d ever seen together at one time.

We rushed to the back window. “They’re cutting off across the field next to us, now,” Barry exclaimed. One by one the throng left the road and followed the lead deer across the newly bare dead grass to the edge of the valley. Here they nimbly descended the rocky cliff. All were apparently of one mind, certain of what they were doing. Straining to see through the bare-branched trees behind our bedroom window, we watched as the herd moved across the open valley, and disappeared straight up the steep, high ridge beyond.

On that morning, so purposeful was this large gathering, that we had a sense that they might be leaving us all together. “The Vanishing Tribe,” I muttered to Barry, remembering Curtis’ haunting photograph of a disappearing Indian nation.

Happily, within a week, we were seeing our usual small group of does, following their path beside our house. And that was it.

However, this winter has been gravely difficult for the deer, and many other creatures. After this year’s deer hunt ended, several does returned. And then came an early ice storm. Now the walking must have become dangerous and difficult for them. For a coyote, racing over the heavy, slippery crust must have been easy. We expected that the most vulnerable of our small herd would be taken. Soon, though, the ice was overladen with heavy snow. It seemed that the remaining deer must have yarded up, using their numbers to pack down an area and a few trails where food was best.

The trouble is, it was too early in the season for them to be restricted to limited food. Also, although there would have been some safety in numbers, the gathering would have meant easy pickings for coyotes, who also could follow the packed trails.

For the first time since I moved to eastern Ontario more than forty years ago, in our area there has been no sign of deer. There are no trails sketched across the distant fields. There is not so much as a single hoof print along the road. No troupe has scrambled up the hill to steal from my neighbors’ liberal bird feeders.

Normally I would have strapped on my snowshoes and scrambled up to the table land and cedar groves on the ridge, anxious to see if I could discover signs there, although half-fearing what I might discover. Unfortunately, this year’s snow has kept me closer to home. And still  the winter continues here, seemingly endless.

Right now it feels as if this poignant life has disappeared from our home area forever. Will deer return to Singing Meadow once the snow finally melts? Surely soon we’ll know for sure.