A Wing in the Door: Life With a Red-Tailed Hawk 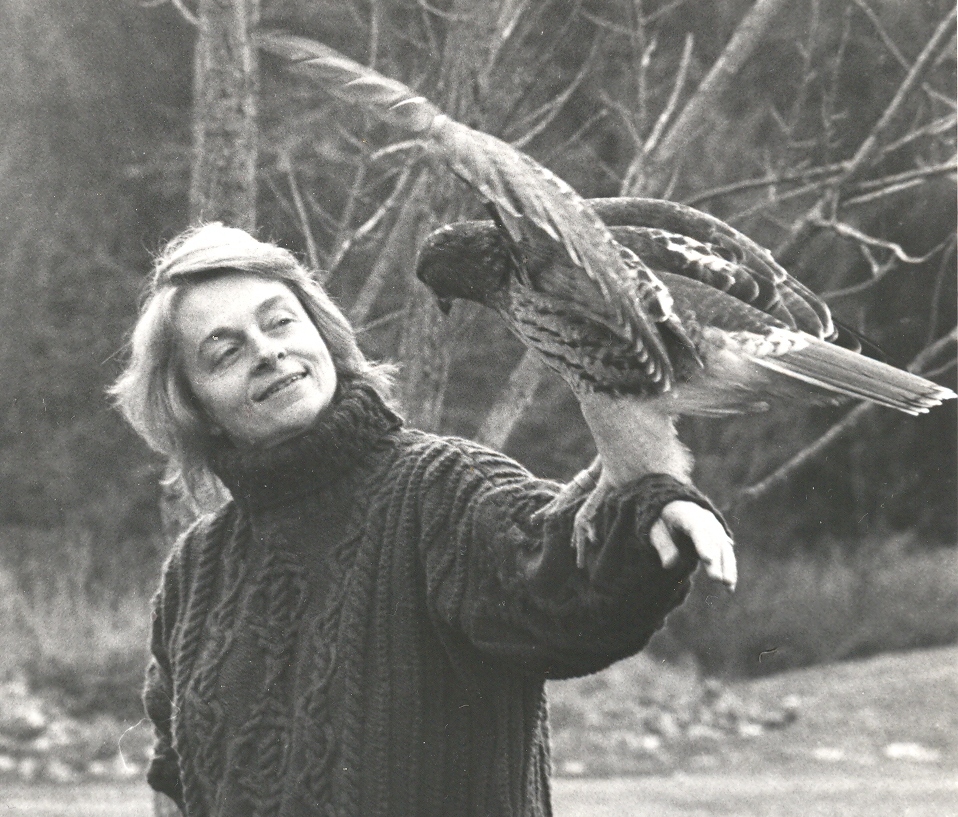 PRAISE for A Wing in the Door

In the style of Jane Goodall and other animal behaviourists, there’s a magnificent tenderness in these narratives—emphatically not to be confused with sentimentality.  Globe and Mail, Toronto

McQuay writes knowledgeably about bird behavior, physiology and the natural life on her preserve. … In describing at length the joys, sorrows, and heavy investment required in trying to rehabilitate an impaired wild animal, she provides useful information for concerned readers everywhere. Library Journal

… The author is a fine lyrical writer, able to paint small, perfect word-pictures that make us feel as though we’re actually watching the young hawk stumble through her education into the ways of the wild.  Booklist

When she came to us, like me, Merak was teetering on the edge of being wild, but had much to learn before she would be able to live freely. Sharing her uncertainties and her difficulties surely would help me to understand.

Illegally taken from the nest as a baby by a would-be young falconer,  Merak, a female red-tailed hawk, was confiscated by the Ministry of Natural Resources and turned over to Kit Chubb, of the Avian Care and Research Foundation for rehabilitation. The next spring, Kit contacted us, at the Foley Mountain Conservation Area, where my husband Barry worked as Supervisor. Would we be willing to let her release the two year old hawk at the park? “She should just go wild again,” Kit said. “I’m sure she can hunt for herself and she should do fine. We’ll just let her go and you’ll never see her again. But,” she added thoughtfully, “she may well make her territory near you. You should keep a lookout. She may find a mate and nest nearby.” Considering further, Kit offered reflectively, “Human-imprinted hawks can be an awful nuisance. They’re so babyish and insistent. I hope you won’t mind if…but I really don’t think she is human-imprinted…”

And so began seventeen years of extraordinary intimacy with this magnificent, beautiful, half-wild hawk. Although Merak came to see us as family and our house as the centre of her world she did fly freely, and in time Barry was able to share her with countless school classes and park visitors. When the big hawk saw a school bus roll up, she loitered in our nearby cottonwood trees until he whistled and then she flew down to his outstretched arm. But often, and specially in fair weather, we would not see her for days at a time.

EXCERPT from A Wing in the Door

All too quickly, there comes an afternoon when Barry has to be away and I am confronted with having to make, on my own, the long, vulnerable walk across the open field to give Merak her mice. And I have no way of knowing whether the unpredictable young female will accept me as a substitute for Barry, her food giver. Trying to understand this wild raptor, I have just read a quote from thirteenth-century King Dancus of Armenia, who cautioned:

Uncomforted by the high, clear light of a late afternoon in June, or the wind sweeping the grasses around my knees, I proceed warily, hoping with an improbable hope to reach the feeding platform before Merak notices me.

Alas, all too quickly I am assaulted by the infantile bird’s hungry screams, and I see her lunging, rather than flying, toward me. Until this horrifying moment, when I come face to face with them, I have not appreciated just what devastatingly effective weapons her rapier talons are. Worst of all, in past encounters the hawk already has shown herself to be wildly temperamental and unpredictable. Shall I drop to the ground, covering my face? At the last heart-stopping moment, she veers aside and strikes out for the platform, where she makes a heavy landing. She screams lustily as I approach, and the screams escalate as, with a shaking hand, I pitch the soggy grey mouse bodies onto the platform in front of her. Pinning them with her talons, she pivots so that her back is to me, flares her tail and shrouds the platform with her outspread wings. (Later I will learn that falconers call this defensive sheltering of prey “mantling.”)

Shaken by the difficult passage to the feeder, I stand by her while she gulps her mice. My reward for the harrowing trip across the field is stroking her after she has snatched down her mice. I know all there is to know about the favorite stroking spots of cats and dogs, but nothing about how one should approach a hawk. Warily, I stretch out my hand to the top of her small head. I can cup it in the curve of my hand. Then I mantle the hawk with both my hands, just as she mantled her food. Like a camera shutter, her milky, bluish third eyelid shoots across to protect her startled eye. Where proper eyelids are closed only in sleep, the third, or ‘nictitating eyelid’ removes dirt and spreads tears. Because it is transparent, it doesn’t impair vision.

But today Merak merely allows, rather than relishes my petting. Standing there, with the wind rushing around us, I take in the pattern of her feathers‑‑dapples, stipples, “eyes” like those on peacock plumage. I discover that there are slight whiskers around her beak. I examine her yellow legs, which medieval kings described as “covered with scales like those on a snake’s belly,” and her eyes “bright as a flame.” Then, without warning, and with a parrot-like squawk, the red-tail launches herself off the platform, flapping raggedly across the field toward the west-lying oak woods.

I begin to appreciate the hollowness of an airborne creature, which begins with many hollow bones, but even more so consists of a curving of feathers and rounded body, all of which buoy air inward, stirring it to her center, as if she herself were only slightly more than air. Now I know that the hawk looks large, but in reality is little more than the sum of her feathers, held together by an indelible personality.

Standing beside the feeding hawk, I was amazed by the swivel of her head. Even over the course of the twenty minutes she stayed with me, she displayed a vast variety of positions, each changing her aspect substantially. Indeed, in every way she is immensely faceted. I am beginning to see that the combination of wildness and domestication results in a overlay that makes her highly complex. Where I might say ten or fifteen things in description of a cat or dog, I could easily find fifty for her.

What Merak Taught Us

Note: You may notice that we generally did not use gloves with Merak. Towards the end of her time with us she became testy. Sometimes she would caution Barry when he was showing her to an appreciative school class. “That’s enough,” she seemed to be saying, as she gripped his arm increasingly firmly. Most often, though, her hold on us was gentle. She used only enough pressure to stay balanced, usually on a forearm, occasionally, awkwardly, on a shoulder, and once on the head of a CBC interviewer who was filming a television feature about her.