What Happened to Merak?

Anguish. Merak had a particularly difficult second round of mating this time. She called and called, and one day crept along the ground and solicited my shoes piteously. Another day she flew at Barry, not viciously, just as if confused and distraught. Finally, last Wednesday, after Merak had spent many days of futile nest-sitting, Barry climbed up and robbed her of a single egg while she wolfed raw beef on the grass. We saw her the next morning. She seemed calm and I fed her. That night, impulsively, I did what I never had done–lightly kissed the top of her feathered head.

That was the last time we saw or heard from her. By yesterday (Sunday) afternoon, try as we have to remind ourselves of other disappearances (never at this time of year) we were anxious. Barry actually went out in thunder and called, and visited her roost pine tree. After supper, in a brief lull of rain, we trudged along the muddy road, pretending to be going for a walk, but actually hoping we’d stumble upon her, well and cheerful.

By today it’s impossible not to feel seriously afraid she is gone forever. I’m struggling to avoid blaming myself. Lately I have been distancing myself a little, inwardly hoping she would disappear shortly before we have to leave Foley Mountain, where the new supervisor may not want to care for her. But never this. Not now. I call and call. The host of little birds at the feeder look respectfully as if they think this is my version of a spring call. I keep glancing at the telephone pole and clothesline pole, but they are vacant. No cheerful ungainly thump and scrape on the barn roof. No peevish “Whaat. What do you want anyway?” from up on our own roof. No thunk onto the waste paper oil drum outside the door. No one in the cottonwoods. Surely they will be the poorer without her presence. Heart ache. Could easily be frantic but won’t. Impossible to think that this largest of our presences here will never ever come again. I feel horribly diminished by the loss of this magnificent, damaged bird.

The shadow of not knowing what happened, hoping, but not being able to know whether her death was quick and relatively easy.

As the beginning intimations of the greatness of this loss come over me, I am overpowered, temporarily undone.I can’t believe she will return now, and in one big way, for all the wonderful song of spring, for me, there is a terrible hush just now. Right to the end, she kept revising her life, rethinking, figuring things out, trying to outsmart Barry by building yet another version of her nest, particularly on the writing room roof. Last spring, sitting with her overhead in the trees, watching the sunset, enjoying our campfire, and at last seeing her fly on several different nights to the nearest pine, plainly “going to bed” as if after years, she was showing us this most private of her times.

Oddly, Pie Cat has been insinuating that she thinks she could safely go out by daylight, something she has not wanted to do while Merak was near.

May 13, 2003  Very achey, broken-hearted about Merak by times. Simply cannot take in that there will be no more reign of feathers. That my constant, checking glances (she became my reference point) yield no glimpse of her. The usual numb surprise that all else continues without her. A great loss, which I am only beginning to take in little corners of…

May 14, 2003  I am overcome with sorrow. Merak was everywhere. She really was my locus point. Each time I saw a leftover piece of her plucked cottonwood bark on the porch, or the generous white splash on the front window, all the time I was listening, listening. There will be no more of the moulted feathers that have been such a gift for so many visitors. This morning, Barry vainly snapped the mousetrap, his signal for her to come, but this time the mouse remains resting on the flower box. Because she so often took hours or even days to show up (though never in May) I think Oh well she will turn up, and half an ear is always open for the noisiness of her. I am barely able to keep going. My heart is swollen. The odd thing is that I have seen none of the five or so turkey vultures this week, who were so commonly scouring the ridges here in recent weeks. And this year, when we stopped to think of it, we realized we have not seen the red-tails who nested in the distant back pond for so many years (since before Merak’s coming).

Friday, May 16, 2003  Yesterday I was brought to my knees again by her disappearance. Everywhere I went, she still was. Now there only remains a bleached ring where her wading pool was. I sat out with Molly and my lunch as I always did before on spring writing days, and there was no Merak to watch soar.

I’m taking intense pleasure in each precious bird here, but with none of these do we have a relationship. This morning I hear the phoebes nearby and think perhaps this year they could safely nest on the back porch after all. Up in the tree a very challenging oriole shrills. Barry observes that it’s not all bad. Maybe this year they can nest with impunity in the cottonwoods, where last night the leaves were out enough to rustle.

April 14, 2004  Driving home from Kingston my eyes were caught by the sight of a dazzling courtship flight. Overhead, a pair of red-tails were soaring, circling in a powerful dance of unity. I pulled to the side and stopped, my eyes flooded with tears. Could it not be that Merak now was free to begin again? Could it not be that she might come back, not to me, but to a wildness that would include for her too this superb fulfilment? I choose to think so. 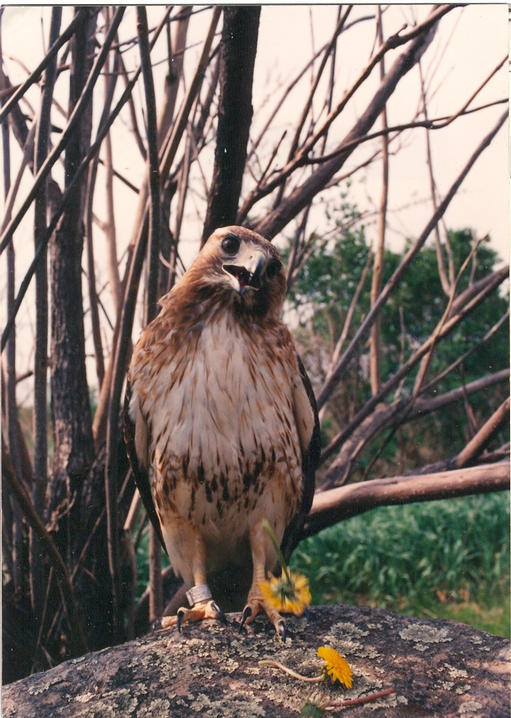